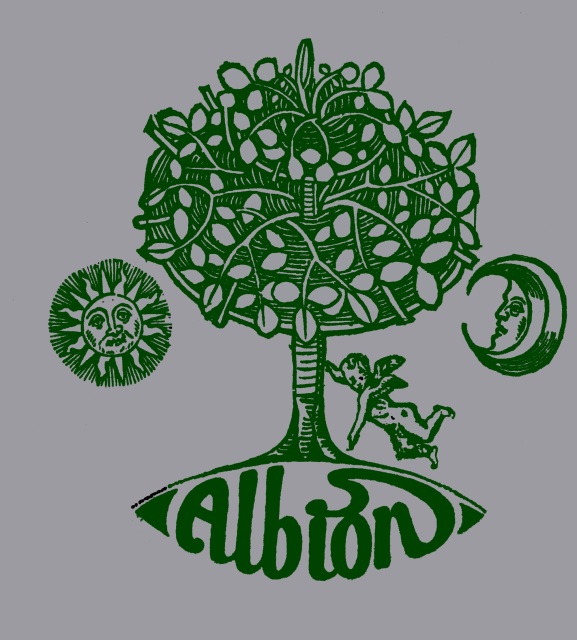 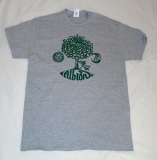 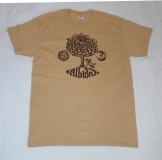 SKU:
£14.85
£14.85
Unavailable
per item
Gildan, 100% cotton.
Add to Cart
In the early/mid 1960s London was a magnet drawing the young, creative and hip in from the regions, shaking off the austerity of the post war 1950s and riding the peak of British wealth.  As the decade drew to a close some of those incomers, and their London friends, left the city and drifted back out into the shires, and the quieter, slower, life of village and market town.  Some settled in North Suffolk and South Norfolk, an open countryside of low hills and wide plains spotted with marsh and cut by fen, a region of few towns and many villages, with the River Waveney dividing one county from the other.

Out of this creative community grew the idea  of reviving the medieval fairs that had once brightened rural life during the summer months. Some of the luminaries included Roger Deakin and Simon Loftus (later to become Chairman of Adnams Brewery). And so the Barsham Faires, and subsequent incarnations such as the Albion Fairs, were born.  As Richard Barnes explained in his book documenting the phenomenon:  “The Sun in the East is the brightness of a string of fairs rising from the flat East for over a decade of summers, rays of lightness in a troubled time for the old island of Britain, known to some as Albion.”

Five heady events took place on Rectory Paddock in the summers from 1972 onwards.  What seemed like a temporary autonomous zone overseen by the Spirit of Misrule was established.  Out of the demise of these events emerged the Albion Fairs to take their place, which continued until the early 1980’s.  A precedent had been set that others would follow in other parts of the country. As Jill Bruce, one of the organisers  of the events explained, the experience was life changing for some:  “That field, that place, that fair: the experience was colossal – a jolt into another reality, the one I was supposed to be in.”

You can gain a much better sense of the spirit of the events by watching the documentary film  The Last Barsham Fair from the East Anglian Film Archive.  The narrator at the start speaks of “the magic and confusion of events ” and what follows is indeed something of a phantasmagoria.  There is a brief glimpse of the  gateway to the fair  bedecked with faux severed heads, in an imitation of fifteenth century London Bridge, as a reminder that restrained and polite society is being left behind for the duration of events.
​
The art work and design associated with the events was a heady combination of medievalism and seventies psychedelia, resulting in something that, to my mind, is unsettlingly attractive.   Three of the iconic posters are shown below. 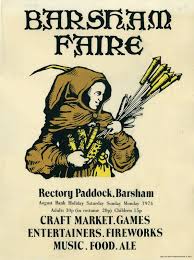 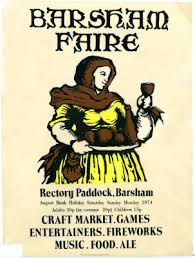 The Fairs Archive is a travelling exhibition documenting this unique slice of social history. Funds  are tight.  Martin and Linda keep the venture going through determination and good will and, if they are lucky, some occasional petrol money. To help secure the future of the Fairs Archive t shirt is being produced and sold using some of the distinctive art work from the original venture.    I think you’ll agree that it is a rather fine looking garment.
The final words go to Richard Barnes  “The Fairs belong to everyone, and if there is a story of the Fairs, it is an unfinished one.”   It is the spirit that fortunately events such as Folk East, held near Woodbridge, appear to have have inherited.    The Spirit of Misrule thankfully still appears again each summer in a new guise.
Albion is of course also the original name for the island of Britain.  The foundational myth, recounted in the 14th century Anglo Norman poem  Des Grantz Geanz reports that the Syrian princes Albina was banished from her homeland and drifted on the seas until storms eventually washed her up on these shores.  On arrival under the white cliffs of the south coast she named this unpopulated land Albion.
RESOURCES

A retelling of the foundational myths of Britain with simplicity and clarity, accompanied by fine illustrative linocuts.