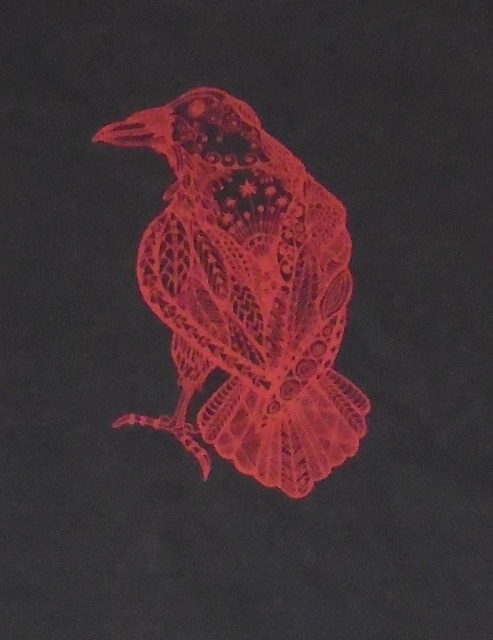 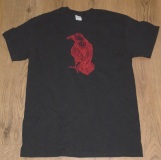 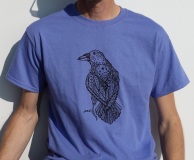 SKU:
£14.85
14.5 14.85 £14.50 - £14.85
Unavailable
per item
Gildan
Add to Cart
Ravens (Corvus corax), the largest of the corvids found in Britain, have long been considered carriers of  messages, and often harbingers of doom.  Their sighting may presage catastrophe or death, although only wizards could interpret their true message. They occupied a liminal space and were regarded as a mediator between life and death. "In every culture ravens fly out of the days before memory, out of Distant Time and Dreamtime, to infiltrate man's dream-life, the psychological haunting places where birds and gods seem one (Woolson 2008, p273)."

The Norse god Odin had  two ravens that perched on his shoulder, whispering to him the news that they had gathered during their airborne wanderings.  The potent symbolism of the bird meant that the raven symbol has been used on Viking military banners.  The use of psychological warfare is therefore not new, and the image would have aroused fear and foreboding in the enemy.

Their intelligence has long been recognised, and their communication skills are exceptional.  Thy have been observed calling wolves to the site of carrion so that they would open the carcass for them. Never one to miss an opportunity to put a downer on things, it was Friedrich Nietzsche who suggested, "Does wisdom perhaps appear on the earth as a raven which is inspired by the smell of carrion?"

The birds have always been found close to gallows or other places of execution and their presence  at the Tower of London, where they have resided for centuries, has come to hold a totemic power.  It is said that if the ravens depart the kingdom of England will fall. Some even claim that King Arthur wasn't laid to rest in Avalon after his death, but returned to live as a raven on Badbury Rings hillfort.

​Their appearance in northern European pagan iconography is frequent, and one of the most impressive examples from the Sutton Hoo cache is shown below: 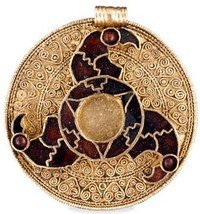 A raft of other examples exist, and an excellent selection can be viewed here:

The raven has also been immortalised in song.

The Three Ravens, and its' closely related Scottish version Twa Corbies (Roud 5), is a poem of Scottish origin first printed in the 19 th century, although the origins of this bleak meditation on mortality can be traced back as far as the 13th century. "Corbies"  is a word of  Middle English origin, a variant of  Anglo-French "corbin", which itself is derived from the Latin " corvinus".  The original music for the song is unknown, and a Breton tune was adopted in the 1960's to accompany it.  The best known recording is by Steelye Span in 1970 on their debut album.  I like this starker version by Bert Jansch below.

An honourable mention should also go to The Stranglers for the The Raven, their fourth album in quick succession and marking the end of an early period of frenetic output.  The title track fairly rumbles along:
​
The accolades really belong with Sandy Denny though, who on her first solo album after the disintegration of Fotheringay, released a collection of eerie mystery in The North Star Grassman and the Ravens. The title track has a haunting, brooding quality that sees the ravens leaving the Tower of London to circle over the ships out at sea.   Apparently Denny wrote the song in response to the death of a merchant seaman friend:
​
The illustration for the T shirt was completed for me by Pauline Saul, an artist living in Kirkcudbright, Scotland.  You can view more of her work at ​https://www.facebook.com/greengatestudio/