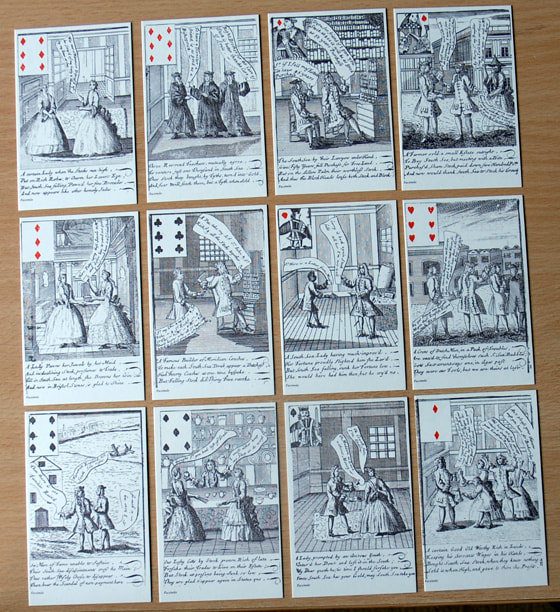 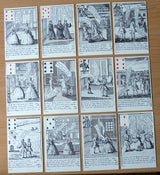 Avarice and stupidly are nothing new. This pack of playing cards is a reminder that the hubris that culminated in the events of 2008 are nothing new. Do we never learn? This pack published by Thomas Bowles examines the financial scandals and faulty projects epitomised by the bursting of the South Sea Bubble. An advertisement appearing in Mist’s Weekly Journal in December 1720 describes the pack as “Bubble cards … tricks of Stock Jobbers … Humours of Change Alley.”

The cards, in fact, provide a unique contemporary record of’ the feverish activities of traders in stock, by depicting in cartoon form a series of domestic situations which represented the atmosphere of the time. Extensive use is made of the balloon technique for reporting the speech of those portrayed and each card has a pithy, not to say in several instances coarse, verse describing the situation.

The cards offer not only a record of’ fashions of dress of the period but also commentary upon those who were tempted and fell as a result of the apparent gold rush – cobblers, reverends, lawyers, “a Brisk Young Gentleman”, Jews, Dutch, French, jobbers, doctors and so on. One of’ the many interesting observations is that the status symbol most generally craved by the newly rich was at that time a coach, the Porsch of its time, although it doesn't say if they were available in red..