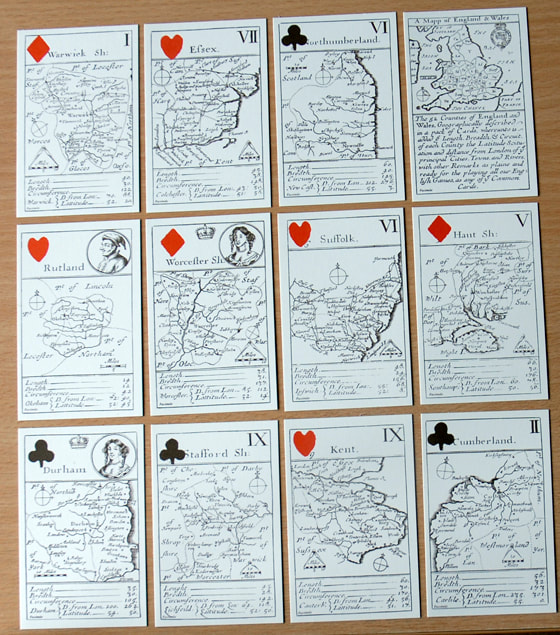 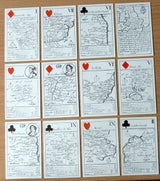 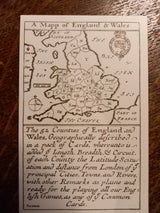 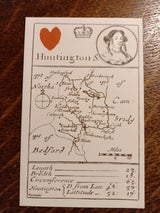 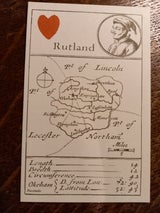 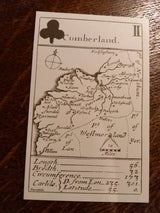 This pack of cards, known to collectors and dealers as the Morden Playing cards, uniquely forms a small Atlas of England and Wales and, as such, it is the first atlas to indicate roads. It is a fabulous idea that is nicely realised. Gambling could now be educational as well as feckless!

The set is entered in the Term Catalogue for Easter 1676 as: “The 52 Countries (sic) of England and Wales, described in a Pack of Cards … Sold by Robert Morden at the Atlas in Cornhill, Will. Berry at the Globe in the Strand, Robert Green in Budge Row, and George Minikin at the King’s Head in S. Martin’s.”

The selection of the Counties for the Suits is described in the Preliminary Card, headed “The Explanation of These Cards”. The King depicted on the cards is Charles II and the Queen, his wife, Catherine of Braganza. The main image on the cards was printed from engraved copper plates, with the suit marks being applied later by stencil.

The cards were clearly designed to give instruction to the young, rather than for serious play. You will note the difference in the counties included from those exisitng in the present day. The pack includes such extanct administrative districts such as Huntingdonshire and Cumberland, and is a reminder of the changing landscape of the country.