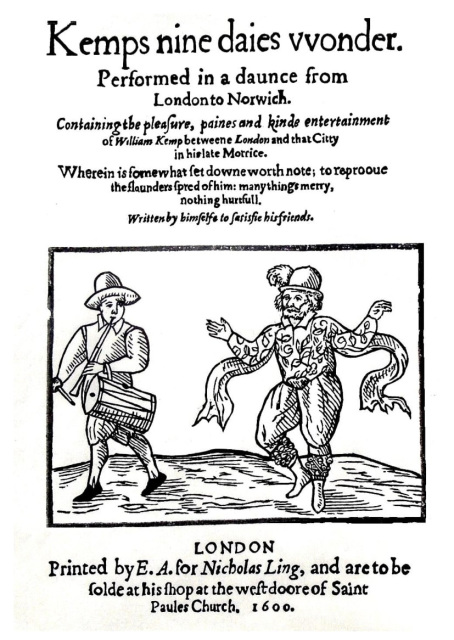 William Kempe was an actor, mainly of comic roles, in the plays of William Shakespeare plays during their first performances in the Elizabethan era. He left the Lord Chamberlain’s Men, the company of which he and Shakespeare were members, in 1599 following a disagreement. It has been said that he insisted that Hamlet would be improved by the inclusion of a dog on wheels!

A year later in 1600 he completed what was known as his Nine Days Wonder, when he morris danced the 110 miles from London to Norwich in an attempt to garner publicity and revive his career. In a slick piece of stage management he actually spread the nine day dance over a period of 23 days. He sustained a hip injury on the second day which may have necessitated these rest periods. He started from London and began to "frolickly to foote it" as he evocatively describes his jig, often accompanied by large crowds. In the modern era he might find himself subject to restraint under the provisions of the Crininal Justice and Public Order Act 1994.