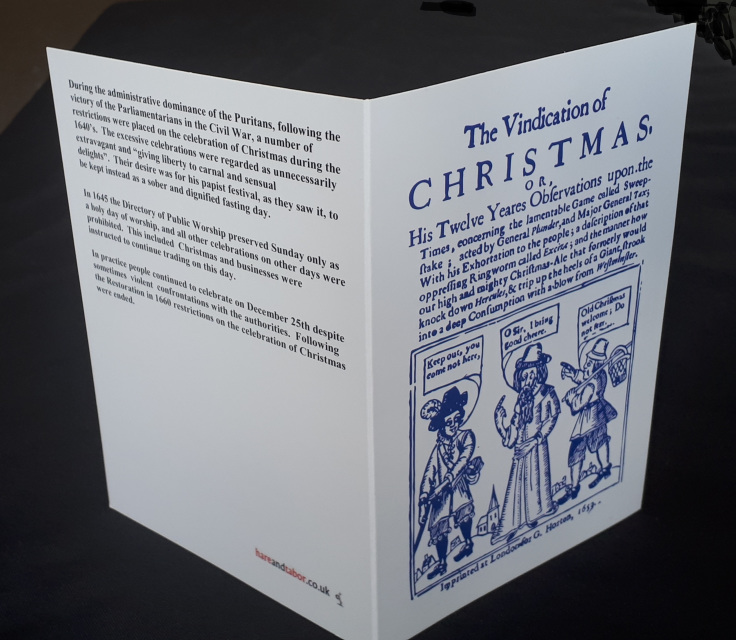 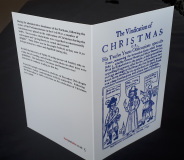 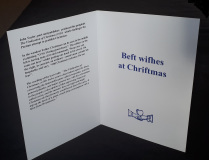 John Taylor, poet and publisher,  produced his pamphlet The Vindication of Christmas (1652)  which challenged the Puritan attempt to prohibit Christmas.

In the woodcut on the front of the card Father Christmas can be seen in the middle exclaiming "O Sir I bring good cheere." The soldier on the left is having none of it and commands, "Keep out, you come not here whilst putting one hand to his sword. On the right, in contrast, an ordinary countryman extends his hospitality and says, "Old Christmas welcome; Don not fear."

During the administrative dominance of the Puritans, following the victory of the Parliamentarians in the Civil War, a number of restrictions were placed on the celebration of Christmas during the 1640’s. The Puritans regarded the excessive celebrations as unnecessarily extravagant and “giving liberty to carnal and sensual delights”.  Their desire was for his papist festival, as they saw it, to be kept instead as a sober and dignified fasting day.

In 1645 the Directory of Public Worship preserved Sunday only as a holy day of worship, and all other celebrations on other days were prohibited. This included Christmas and businesses were instructed to continue trading on this day.

In practice people continued to celebrate on 25th December despite sometimes violent confrontations with the authorities. Following the Restoration restrictions on the celebration of Christmas were ended.