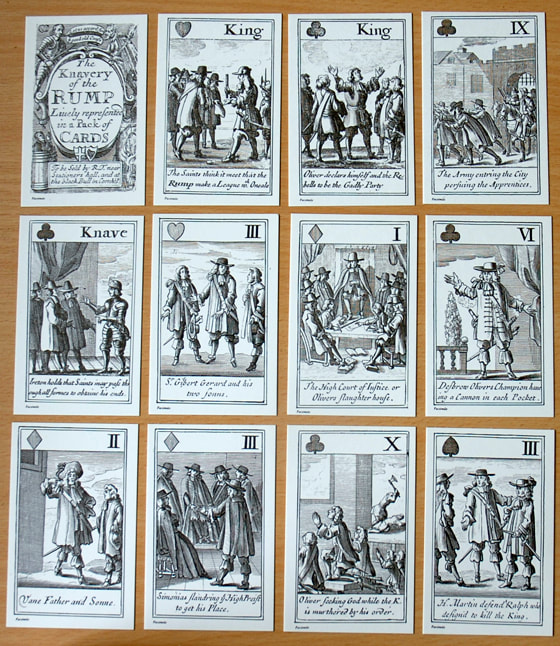 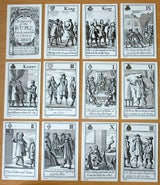 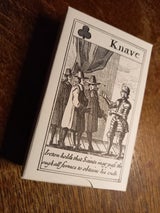 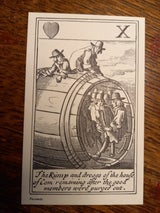 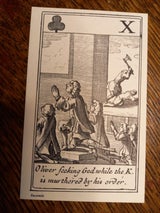 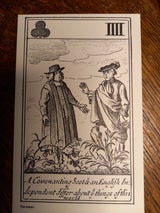 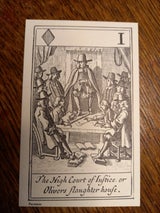 Knavery of the Rump Playing Cards 1679

The end of Cromwell's Commonwealth government was followed, predictably, by a Royalist reaction upon the accession of Charles II to the throne in 1660. The previously austere regime which discouraged unproductive forms of enjoyment, such as playing at cards, was replaced by one which tended to venture far in the opposite direction.

However, it is rather surprising that it was not until 1679 that a pictorial pack of playing cards was published which satirised the personalities and events of Commonwealth period. This pack was engraved from designs by the artist Francis Barlow, the originals of which many are held in the British Museum, and entitled “The Knavery of the Rump”. They were made or published by “R.T.” (Randal Taylor.) and the earliest advertisement for these cards so far discovered appeared in November 1679.

Only three complete packs of these cards are known to have survived; the pack reproduced here is the only one with the title card giving the name of the pack which is often simply referred to as the “Rump Parliament pack”.

The illustrations on the cards provide a rare visual impression of the times. The satirical element involves presenting the personalities in various unfamiliar occupations and costumes, and we see not only the military warring factions, but the humbler souls of town and countryside in traditional dress, the waggoners, shepherds, corset-makers, carpenters and so on.

The pack is, in fact, a valuable and fascinating witness to a variety of aspects of mid 17th-century society.