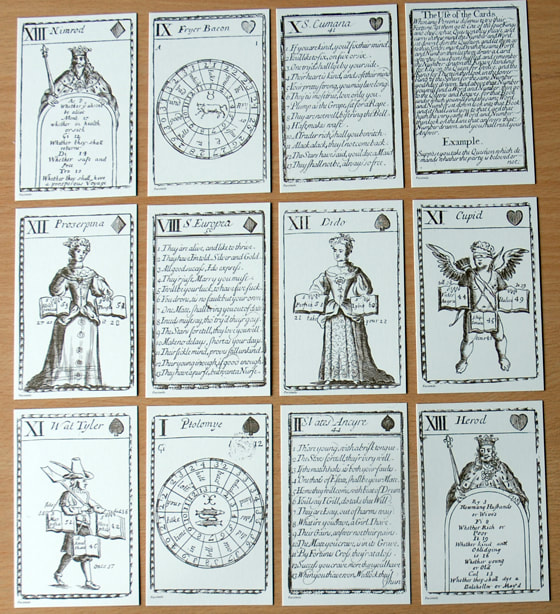 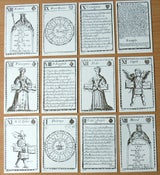 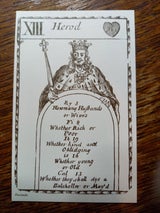 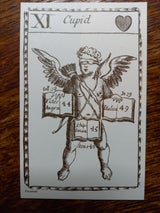 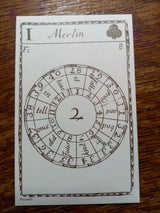 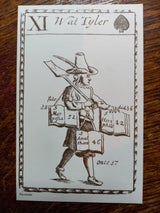 John Lenthall was a Fleet Street stationer who, in the course of the first quarter of the 18th century re-issued, re-engraved or imported at least forty different packs of pictorial cards.

Although these fortune-telling cards are generally known as “Lenthall’s”, the first edition, possibly made by someone else, is advertised as early as 1690. Whoever may have originated them, however, they were probably the first pack of cards ever made specifically for the purpose of fortune-telling.

A few years earlier two packs dealing with the subject of palmistry had been published in Nuremberg, but these were quite different in character. Otherwise, previously, ordinary playing cards had been used for purposes of divination. A full explanation of these cards is enclosed with the pack.

These cards bear, in addition to the usual suit and number markings, figures and diagrams which can be used for fortune telling. Wat Tyler appears as the knave of spades! There is a contemporary set of instructions in the use of the cards printed on two of the cards. The process to achieve a result is complex, and in some ways it is better to treat the pack as a fabulous miniature illustrated esoteric book, rather than a practical tool of divination.